Enter your City name or Pincode

Moreh is an important town located in the Chandel District in Manipur. Moreh is known as the India's Gateway to South-East Asia and as the commercial capital of Manipur.  The town lies near India-Myanmar border. Literally Moreh means means "I'm tire" in Burmese. The town of Moreh is a fast developing and an important trade centre in India. Moreh is one of the big commercial hubs in northeast.


How to reach Moreh

Moreh can be reached through rodways from Imphal and other states of northeast. Moreh connects India to Kalewa in Sagaing Division of Myanmar by the Indo-Myanmar Friendship Bridge. On the 22nd Feb 2012, Foreign minister of India announced opening a highway that will connect Moreh, in India and the Myanmar-Thai border near Mae Sot. 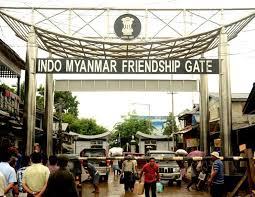 Moreh is located at a distance of 110 kms from the capital city of Imphal. There are no airports in Moreh. The nearest air link is the Imphal International Airport.

Moreh can be easily reached through roadways from Imphal. There are regular bus and taxi services from Imphal to Moreh.

Are you a Business Owner?

Add the products or services you offer